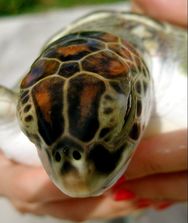 Green Turtles can grow to be over 400 pounds (~180 kg), making them one of the largest species of sea turtles. They are found over a large part of globe.

Shell -  The shell of a green turtle is oval in shape. The three scutes in the center of the shell are sort of rectangular, with pyramid shaped scutes by the head and tail. 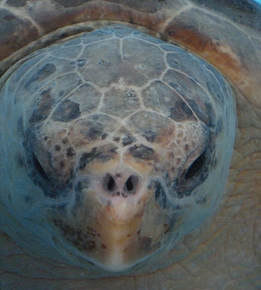 Green Turtles is another large species, growing up to 350 pounds (160 kg). Loggerheads are the most common nesting turtle in the central Florida Gulf Coast area.

Shell -  The shell of a loggerhead turtle is tear-drop or almond-shaped, with the tail area almost coming to a point.. The  center line on the shell has four rectangular sctues, with just one pyramid-shaped scute by the tail.

Head - The head of a Loggerhead Turtle is very large! It has powerful muscles and heavy strong jaws that allow it to crack crab shells. The Loggerhead has one large round-ish scute on the top of its head, with others surrounding it. 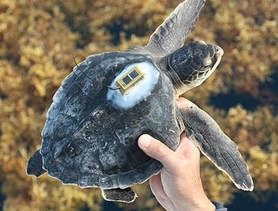 Kemp's Ridley Sea Turtles are a smaller species of turtle, reaching only about 100 pounds (220 kg). They are listed as endangered, and are only occasionally found in Florida.

Shell -  The shell of a Kemp's Ridley turtle is almost round. The scutes have a pattern similar to the Loggerhead - four rectangular scutes down the center line.

Head - The head of a Kemp's Ridley is rounded. The top of the head has a large central scute like a Loggerhead, but it is not nearly as large. The central scute on the head is not as round, and looks sort of square-ish. 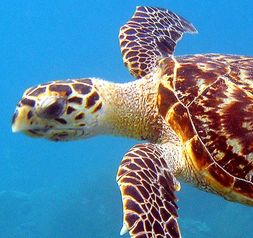 Hawksbill Turtles are an endangered species that was also made extinct because of the beautiful colors of their shells. They grow to about 200 pounds (90 kg).

Shell -  The shell of a Hawksbill turtle is oval, and often has colorful patterns of browns and tans. The  center line on the shell has three overlapping scutes that are sort of diamond-shaped. There are pyramid-shaped scutes by the head and tail.

Head - The head of a Hawksbill turtle gets its name from the long pointed beak. The head looks sort of pointed when viewed from above, too.
Diagrams courtesy of seaturtleexploration.com